People with an integrative worldview seek self-realization and a deeper unity in all the fragmentation that surrounds them. This worldview thus formulates an answer to the limitations and challenges of late-postmodern living conditions – particularly the immense societal polarization and fragmentation; a cultural climate of distraction, disinformation, and meaninglessness; and existential problems of a planetary scope and nature.

Integratives look for connections and deeper patterns, and try to bring together dominant oppositions ~ such as object and subject, science and spirituality, economics and ecology, male and female, right and left. They often see these contradictions as “on a deeper level” part of a greater wholeness. This ultimate unity of all is a central belief in this worldview. The worldview is therefore characterized by a global commitment and universal, existential values.

In the quest for truth, integratives emphasize the need to bring together both objective and (inter)subjective forms of knowledge. They validate the central insights of both modern science as well as spiritual and contemplative traditions. From the idea that every perspective is limited, they underscore the need to connect and bring different perspectives together.  Building forth on the postmodern insight that we’re constructing the world through the (subjective) stories we tell, integratives point at the more objective patterns revealed in that process – the structures of cultures and consciousness – as described by, for example, developmental psychology.

The view of reality is of a great interconnected whole, which is both physical and spiritual ~ often conceptualized as an all-pervasive consciousness, or a larger divine reality. The divine is both immanent and transcendent in this view: God is in the world, and the world is in God. Evolution is a key term that in this worldview isn’t reserved for biophysical processes alone, but also describes the development and growth of humans and their cultures. There is often a profound sense of connection with nature, and an understanding of earthly life as imbued with consciousness or ‘spirit.’ Nature tends to be seen as having intrinsic value (value in and for itself) as well as spiritual significance. The relationship to nature is often seen as one of mutuality, partnership, and collaboration.

Integratives are often wisdom seekers, dedicated to their self-actualization. That self is an inseparable part of a larger whole, with which it is directly and mutually connected: an interdependent self instead of a more separate ego. Integratives therefore experience personal significance in contributing to that greater whole of which they feel intrinsically part. Universal, existential, and global values are usually dominant ~ such as truth, inner harmony, oneness with nature, world peace, awe-inspiring beauty, servant leadership, and addressing our pressing planetary problems.

Integratives seek to bring together different perspectives, uncover a deeper unity, and contribute to a world in which everyone can flourish. In many ways that is very noble. At the same time, the idea of ​​seeing the “bigger picture” can be accompanied by a certain (hidden) arrogance. A strong emphasis on lofty ideals and spiritual beliefs can also result in an ungrounded view of life, denying human limitations and realities. And it can lead to a lack of involvement in worldly or political issues. It’s precisely when we think we fathom the greater unity of the universe that it’s important to remain humble and to realize our limited place in this vast and mysterious whole. The actual embodiment and concrete expression of certain ideas or beliefs (such as the oneness of everything) is often the greatest work. Because the integrative worldview is still in its infancy, we don’t have a good idea of ​​the new problems it’s likely to generate. 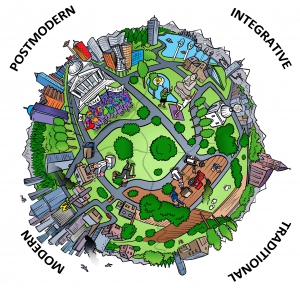 In this image, the integrative worldview is symbolized by the social entrepreneur combining modern entrepreneurial spirit with postmodern idealism. The person on the yoga mat holds a mobile phone in her hand, symbolizing the integration of century-old spiritual practices with modern technologies. Religious and spiritual expressions are tolerant of their differences, as seen in the varied sacred buildings. The water points at the self-reflexivity of this worldview, and the wind turbines and green roof show its commitment to global environmental values. 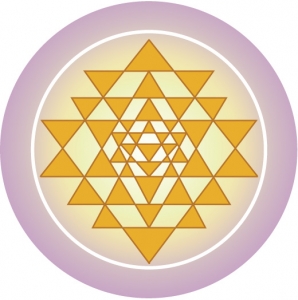 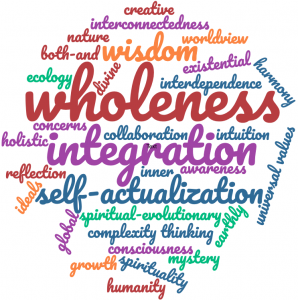 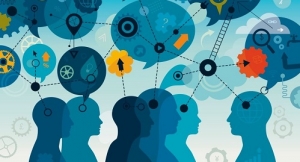